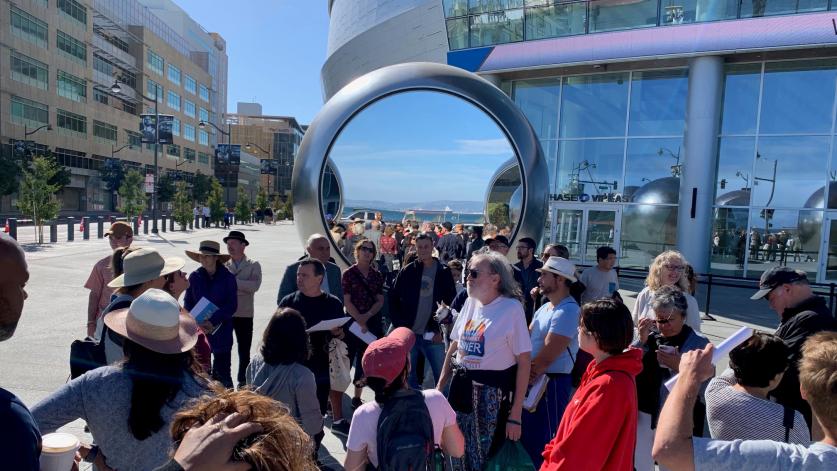 More than 1,200 people registered for the nearly sold-out What's Out There Weekend San Francisco Bay Area, organized by The Cultural Landscape Foundation (TCLF) and featuring a Friday reception followed by two days of free, expert-led tours throughout the region on September 14-15. Participants came away with a deeper understanding of the Bay Area's considerable landscape legacy. From iconic landscapes to college campuses, roof gardens, and modernist parks, the accompanying What's Out There San Francisco Bay Area guidebook (available for purchase here) details 35 treasured landscapes within the Bay Area. Many attendees were struck by the complex and sometimes competing overlay of historic sites, legacy projects, and new work. From Mission Bay to Fort Mason, cultural landscapes in the San Francisco Bay Area continue to adapt and remain relevant in a growing region.The program began with a lively reception with a sumptuous taco bar on Friday, September 13, at the new SWA offices in San Francisco. SWA principal and TCLF board member Ren√© Bihan opened the reception, followed by an address to an engaged crowd of hundreds by TCLF's Charles Birnbaum. The reception set the stage and built momentum for the 23 tours that followed over the next two days.

What’s Out There San Francisco Bay Area Online Guide
The Weekend kicked off with seven separate events, including a behind-the-scenes tour of the Golden Gate Park Japanese Tea Garden led by head gardener and resident historian Stephen Pitsenbarger. Other highlights included a look at the stunning campus of Stanford University with John Wong of SWA, Cathy Blake, associate director of Stanford University campus planning, and landscape architect Andrea Cochran. This was followed by a walk through the Music Concourse with Doug Nelson of RHAA and John Dennis of the San Francisco Department of Public Works. Shortly after was a tour of the Golden Gate Bridge Plaza, Pavilion and Trail with landscape architect John Skibbe and Surfacedesign's Nick Gotthardt. Skibbe, alongside Steve Kasierski of the National Park Service, then led an insightful excursion through historic Fort Baker and Cavallo Point.

A packed Saturday afternoon started with an outing at the University of California, Berkeley, guided by Veronica Wong, which was followed by an informative trip through the Marin Art and Garden Center with Steven Schwager. An entertaining discussion of Crissy Field and the Tunnel Tops project was provided by Claire Mooney of the Golden Gate National Park Conservancy and Michael Boland of the Presidio Trust. Meanwhile, across town, tours of the modernist landscapes of the Golden Gateway, Sydney G. Walton Square, and One Maritime Park were led by the very knowledgeable Adam Greenspan of PWP, who brought to light the evolving nature of landscape architecture practice and the critical links between older projects and new work. The evening ended with the exceptional, sold-out tour of Salesforce Park with Ashely Langworthy of BRV and Adam Greenspan. The large group took over the park, practically enveloping the Bus Jet Fountain.

The excellent weather continued into Sunday, which opened with a trip to Lawrence Halprin's Justin Herman Plaza/Embarcadero led by Page & Turnbull's eloquent Hannah Simonson. The morning proceeded with the San Francisco Department of Public Work's Koa Pickering providing a tour of Sigmund Stern Grove, a unique outdoor concert venue initially built by the Works Progress Administration and later improved by Halprin. Tours continued with a walk around the campus of the west coast's first women's college, Mills College, led by Vonn Marie May of Cultural Land Planning & Research and campus architect Karen Fiene. The morning was capped by a combined visit to Ghirardelli Square, Fort Mason, Aquatic Park, and Jefferson Street led by SWA's Fran Hegeler and Ren√© Bihan, who were joined by Christina Wallace of the Fort Mason Center, Dan Hodapp from the Port of San Francisco, and David Brouillette of the San Francisco Maritime National Historic Park. The group examined layers of repurposed landscape features spread over a large area, concluding at a farmers’ market at the Fort Mason Center for Arts & Culture. Many participants attended multiple tours throughout the weekend, culminating in a sold-out Sunday afternoon. Lunch was followed by a visit to the Kaiser Center Roof Garden in Oakland, an excursion led by ICF's Jonathan Rusch and Cathy Garrett of PGAdesign.

The afternoon proceeded with a combined tour of the Joe DiMaggio Playground, Pioneer Park, and Fay Park directed by the Department of Public Works’ Lizzy Hirsch and neighborhood advocate Julie Christensen. The weekend concluded with highly popular tours of South Park led by David Fletcher of Fletcher Studio, the Oakland Museum of California led by Paul Peters of Hood Design Studio, and Mission Bay, with Chase Stadium and Daggett Park, led by Chris Guillard of CMG and Ren√© Bihan.

The Weekend would not have been possible without support from the National Endowment of the Arts, San Francisco Recreation and Parks, ASLA Northern California Chapter, and the tireless efforts of TCLF board members Ren√© Bihan and Alexis Woods.

The next What's Out There Weekend will take place in San Diego on October 26-27, 2019 , registration is now open!

Visit the comprehensive and richly illustrated What's Out There San Francisco guide to learn about more Bay Area sites featured during the Weekend.