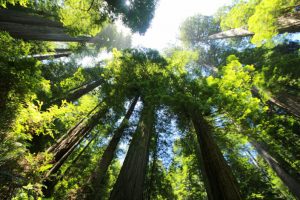 Trees such as these in Sequoia National Park will continue to absorb carbon dioxide at generous rates through at least the end of the century, a new study finds. (Image credit: Kolibrik/Pixabay)

By analyzing decades of experiments, the researchers mapped the potential of carbon dioxide to increase forest biomass by the end of the century, when atmospheric concentrations of the gas could nearly double. This, in turn, will enable plants and trees to store more carbon.
BY ROB JORDAN

Like the eponymous character in Shel Silverstein's classic children's tale, trees are generous with their gifts, cleaning the air we breathe and slowing the ravages of global warming by absorbing about a quarter of all human-caused carbon dioxide emissions. But this generosity likely can't last forever in the face of unabated fossil fuel consumption and deforestation. Scientists have long wondered whether trees and plants could reach a breaking point and no longer adequately absorb carbon dioxide.

Trees in Sequoia National Park.
An international team led by scientists at Stanford University and the Autonomous University of Barcelona finds reason to hope trees will continue to suck up carbon dioxide at generous rates through at least the end of the century. However, the study published Aug. 12 in Nature Climate Change warns that trees can only absorb a fraction of carbon dioxide in the atmosphere and their ability to do so beyond 2100 is unclear.

"Keeping fossil fuels in the ground is the best way to limit further warming," said study lead author C√©sar Terrer, a postdoctoral scholar in Earth system science in Stanford's School of Earth, Energy & Environmental Sciences. "But stopping deforestation and preserving forests so they can grow more is our next-best solution."

"Planting or restoring trees is like putting money in the bank," said co-author Rob Jackson, the Michelle and Kevin Douglas Provostial Professor in Earth System Science at Stanford. "Extra growth from carbon dioxide is the interest we gain on our balance. We need to know how high the interest rate will be on our carbon investment."

Several individual experiments, such as fumigating forests with elevated levels of carbon dioxide and growing plants in gas-filled chambers, have provided critical data but no definitive answer globally. To more accurately predict the capacity of trees and plants to sequester carbon dioxide in the future, the researchers synthesized data from all elevated carbon dioxide experiments conducted so far , in grassland, shrubland, cropland and forest systems , including ones the researchers directed.

Using statistical methods, machine-learning, models and satellite data, they quantified how much soil nutrients and climate factors limit the ability of plants and trees to absorb extra carbon dioxide. Based on global datasets of soil nutrients, they also mapped the potential of carbon dioxide to increase the amount and size of plants in the future, when atmospheric concentrations of the gas could double.

Their results show that carbon dioxide levels expected by the end of the century should increase plant biomass by 12 percent, enabling plants and trees to store more carbon dioxide , an amount equivalent to six years of current fossil fuel emissions. The study highlights important partnerships trees forge with soil microbes and fungi to help them take up the extra nitrogen and phosphorus they need to balance their additional carbon dioxide intake. It also emphasizes the critical role of tropical forests, such as those in the Amazon, Congo and Indonesia, as regions with the greatest potential to store additional carbon.

"We have already witnessed indiscriminate logging in pristine tropical forests, which are the largest reservoirs of biomass in the planet," said Terrer, who also has a secondary affiliation with the Institut de CieÃÄncia i Tecnologia Ambientals, Universitat AutoÃÄnoma de Barcelona. "We stand to lose a tremendously important tool to limit global warming."