Walter Hood, founder of Hood Design Studio-the firm responsible for the restoration of the Bayview Opera House, landscaping of the gardens at the de Young Museum and the Broad in LA, and the upcoming plan to transform the Oakland Museum of California's roof into a public art oasis-is one of this year's 26 MacArthur "genius" grant recipients.

According to the MacArthur Foundation, Hood won for "creating ecologically sustainable urban spaces that resonate with and enrich the lives of current residents while also honoring communal histories."

Born in Charlotte, North Carolina, the 61-year-old landscape architect and professor at the University of California Berkeley has worked and lived in Oakland for more than 20 years, establishing Hood Design Studio in 1992.

Though he has worked with privately-owned structures, Hood primarily works within the public realm and urban environments. Smaller, more whimsical projects, like Splash Pad Park near Oakland's Lake Merritt and the two-block parklet on Powell Street in San Francisco, made up of aluminum and wood grating, show off his prowess when it comes to publicly accessible design.

Hood's work also places an "emphasis on such societal scars as slavery and segregation," according to the San Francisco Chronicle, as seen in such works as Nashville's Witness Walls a sculptural installation paying tribute to the Civil Rights movement, or Oakland's 7th Street Dancing Lights, which features a line of blue "dancing" street lights and is emblazoned with the faces of local and national African American leaders. 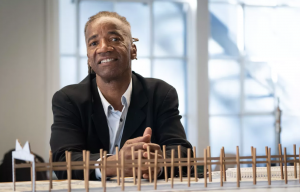 One of his most stunning works in San Francisco is the Frame/Refrain collaboration in Hunters Point where passersby look through a massive Rococo bronze frame, created by artist Mildred Howard, at Hood's bulbous structure sitting just below the Bay Bridge in the distance. Behold.

Hood has won many accolades during his career, including the Rome Prize in Landscape Architecture and the American Academy of Arts and Letters. But the MacArthur Fellowship, it seems, is his crowning achievement.

"Out of all these awards, the MacArthur is the one that really says you deserve recognition for everything you're doing," he said Monday.

"The best way to describe it is an out-of-body experience," Hood told Curbed. "I got a casual phone call from the MacArthur Foundation telling me I won. I was pretty floored since it wasn't even on my radar, which made it all the better."

He added, "I thought it was a crank call."

Hood said us that, in addition to the renovation at the Oakland Museum of California, he's also excited about two upcoming projects-a new park atop Yerba Buena Island and a public art piece for the Embarcadero fire station under the Bay Bridge.

Of the 26 winners, another local nabbed top honors, Oakland attorney and restorative justice practitioner sujatha baliga, whose efforts have helped curtail the criminalization of people of color and break cycles of recidivism and violence.